My Account
No products in the basket.
€0.00 Basket
Menu

To find out more, click on the relevant challenge and see the recommendation from our team of Vets and Nutritionists:

An overview of the Metabolism and Energy Production in Horses 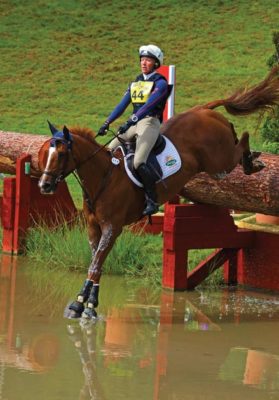 Sport Horses, Dressage Horses and Eventers are extraordinary athletes and can perform physical abilities (running and jumping) that exceed most other animals of a similar size. The superior athletic ability of the horse is attributed to the horse’s high aerobic capacity, large intramuscular stores of energy, an ability to increase the oxygen-carrying capacity of the blood, the efficiency of their gate and their ability to thermoregulate and keep themselves cool when exercising. This article describes how metabolism and energy storage are achieved in the horse.

Following Horse feeding, the rise in blood sugar initiates insulin release from the pancreas. Insulin allows glucose to leave the bloodstream and enter muscle or adipose (fat) tissue (among other body tissues), thereby returning blood glucose concentrations to baseline. Fibre (e.g., forages such as hay and pasture) are fermented by the good bacteria in the large intestine to produce volatile fatty acids (VFAs), namely acetate, propionate, and butyrate. Once absorbed, propionate is converted to glucose in the liver, while butyrate is converted to acetate. Acetate can then be metabolized to ATP by a variety of tissues or can be incorporated into fat synthesis.

Once inside cells the glucose can either be broken down, which results in the creation of ATP. ATP is the energy or “battery” of the body and enables muscles to contract. When at rest, excess levels of glucose are stored as glycogen (chains containing many thousand glucose molecules) for use during exercise. Ninety per cent of the body’s glycogen stores are in muscle and 10% are in the liver. When glycogen stores have run out the body then starts to metabolise fat to create energy and when fat reserves have been used up the body starts to metabolise protein to create energy.

During Horse fasting, as blood glucose concentrations decline, a hormone called glucagon is released from the pancreas. Glucagon promotes the breakdown of glycogen stores in the liver to increase the blood glucose levels which can then be used for energy generation is whichever tissues require it. Glucagon also releases fats from fat stores, so fat can be used as an energy source. PUFAs are an excellent source of energy when they are oxidised. Finally, amino acids can be broken down to provide energy or glucose. Breakdown of protein and amino acids is the last resort and least preferred form of energy production because it is not very energy efficient and produces ammonia in the process, which then must be detoxified to urea in the liver and excreted in the urine. The metabolism of protein to create energy results in loss of muscle mass and power and is therefore not desirable.

During Horse exercise, a hormone called adrenaline (the fight or flight hormone) is released into the circulation from the adrenal gland. Adrenalin releases free fatty acids from fat tissue so that skeletal muscle can use them as fuel. Adrenaline also initiates the metabolism of skeletal muscle glycogen stores to glucose for energy (ATP) production. At all levels of work intensity, both carbohydrate (muscle glycogen, blood glucose) and fat are made available as fuels to the muscle. However, at lower levels of work intensity, proportionally more energy is derived from fat oxidation. At higher levels of intensity, more energy is derived from carbohydrate metabolism. Protein and amino acids can be used for energy sources during exercise, though as mentioned above their overall contribution to fuel production is minimal. Once glycogen stores become depleted fatigue and a decline in performance occur. 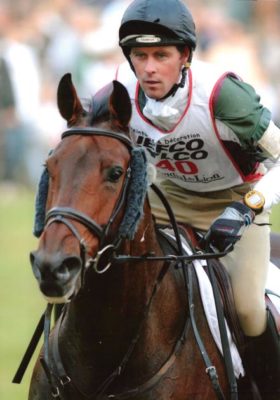 Depending on equestrian discipline and level of competition, the horse’s diet can be adjusted to maximise preferential feed reserves.  Endurance racing horses would require a higher fat diet to help increase the fatty acid stores that will be the main source of energy used during training and competition. On the other hand, the racehorse, while still using fatty acids to train, also needs higher levels of glycogen during a race over a few furlongs. The event horse and dressage horse have requirements that are somewhere between those of a racehorse and those of an endurance horse.

In the presence of sufficient amounts of oxygen, adrenaline causes the breakdown of glycogen into glucose and glucose is then broken down to pyruvate and in the process ATP, carbon dioxide (CO2) and water (H20) are produced. The ATP is used for muscle contraction, the CO2 is removed in the lungs and the H20 is removed in the urine or sweat. If there is insufficient oxygen available to support aerobic metabolism, then glycogen is broken down to glucose and glucose is broken down to lactic acid. The lactic acid is then removed to the liver to be further broken down to glucose. If the rate of production of lactic acid in muscles is greater than the rate at which it can be cleared, pain and burning and a decline in performance occur. Glucose breakdown and lactic acid production are good for speed but limit distance. Horses that produce the most lactic acid are almost always the fastest e.g. the polo pony or the 5-furlong sprinter. By comparison, the endurance horse produces very little lactic acid, even when exercising a maximum speed to fatigue. Similarly, whilst the 5-furlong Thoroughbred sprinter may have a blood lactate of 30 mmol/l after a race, it may be hard to push the blood lactate concentration of an elite 100-mile endurance horse above 5 mmol/l, even at a flat-out gallop. The difference, the endurance horse may be able to go for 100 miles at 10mph, but will come in way behind the 5-furlong sprinter and vice versa.

Aerobic metabolism is approximately 18 times more efficient than anaerobic metabolism. Consequently, training increases the aerobic capacity of horses, which is the time it takes for energy production to switch from aerobic to anaerobic. 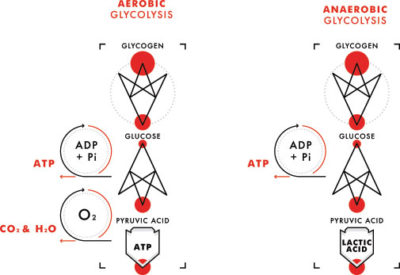 Following digestion and absorption, amino acids are used to make protein, a key component of all tissues, but especially the muscle in an athletic horse. Muscle protein synthesis is activated by amino acids, insulin, certain hormones and by exercise stimuli. The greatest rates of muscle protein synthesis happen during growth, and rates decline as the animal ages. Dietary amino acids that are provided in greater quantities than can be used to make protein are degraded by the body, and the resulting ammonia is converted to urea (a nitrogen-containing molecule) and excreted in the urine. The conversion of ammonia to urea puts considerable “metabolic stress” on the liver.

Depending on the type of equestrian activity being undertaken there are several ways in which dietary modification and the use of nutritional supplements can support energy production and storage and clearance in horses. The balance between aerobic and anaerobic metabolism depends on the intensity of the exercise. The endurance horse typically travels at speeds (trotting and light canter) that can be maintained almost entirely by aerobic metabolism. On the other hand, all-out sprinting (e.g. Thoroughbred racing) and other forms of heavy exercise, such as the cross-country test in a three-day event, involve a substantial amount of anaerobic metabolism, with an accumulation of lactic acid in muscle and blood.

Two types of fatigue have been recognised. The first, muscle fatigue occurs when muscles run out of energy sources and can no longer create the

It is estimated that as many as 50-90% of horses in training may experience gastric ulcers. In the absence of access to continuous grazing, horses

Horses exhibit the greatest sweating rates of any animal. Sweat production is the primary mechanism of controlling and cooling body temperature in horses. Evaporation of

Racehorses are at a greater risk of developing respiratory diseases. In addition to infectious diseases, the management of racehorses is such that normal airway mucous

Intestinal dysbiosis refers to an imbalance between good bacteria and bad bacteria in the intestine of the horse. A healthy population of good bacteria (called

During high-intensity exercise, cells in the body and especially muscle do not receive oxygen in sufficient amounts to meet their metabolic demands and consequently metabolism